By UncontainedLife on August 11, 2015 in Blog, Destinations, S.E. Aisa 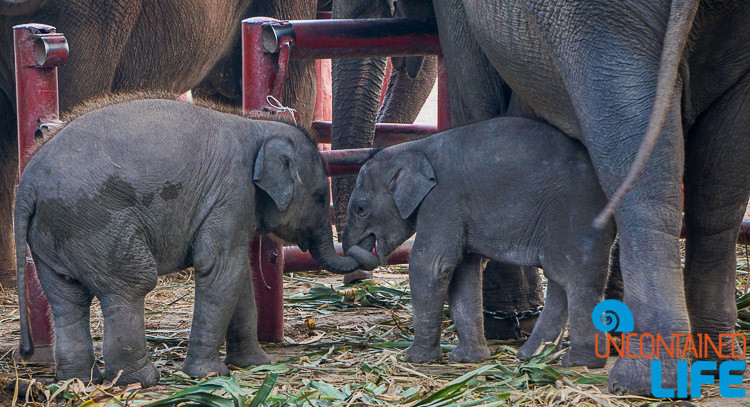 After the sights and senses overload of Bangkok, Justin and I were looking forward to our weekend escape to Ayutthaya, Thailand. Ayutthaya was, we felt, a place where we could get some much-needed R & R. Ok, there was also the little factor of the Legend of King Naresuan film series–the 6th installment of which was being advertised like mad all over Bangkok. This series follows the adventures of the real-life King of Ayutthaya who, as narrated by said films, was not only totally able to rock the all-important “I may be splattered in blood, but I’m still hot” look… 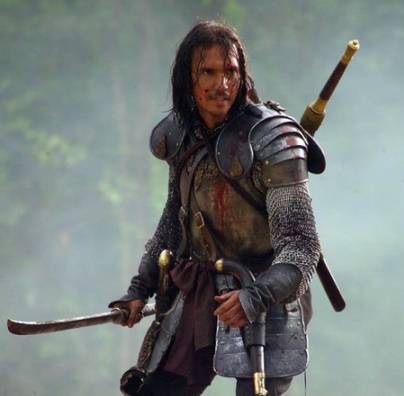 …but was also an awesome warrior who won Siamese (Thai) independence from Burma by killing his childhood nemesis (I.E. the King of Burma) in an elephant duel to end all elephant duels: 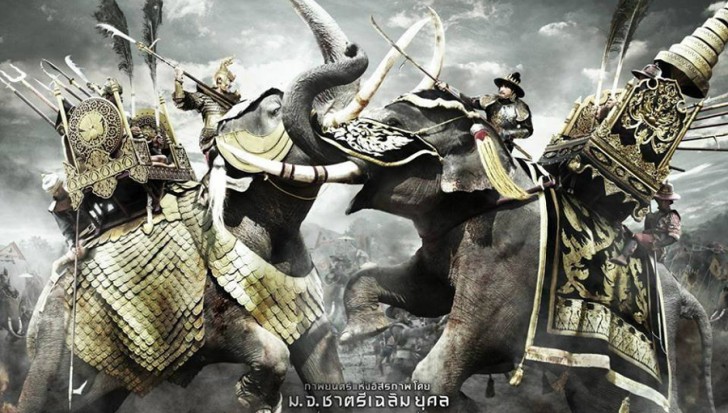 Anywho. We were eager to see the historical locales where the drama unfolded–or, at least, what’s left of it (the Burmese attacked Ayutthaya again in the 18th century and sacked the city)–and, that first morning in the city, we were fully expecting the headless Buddhas and charmingly crumbling Wats. What we weren’t expecting were the elephants. 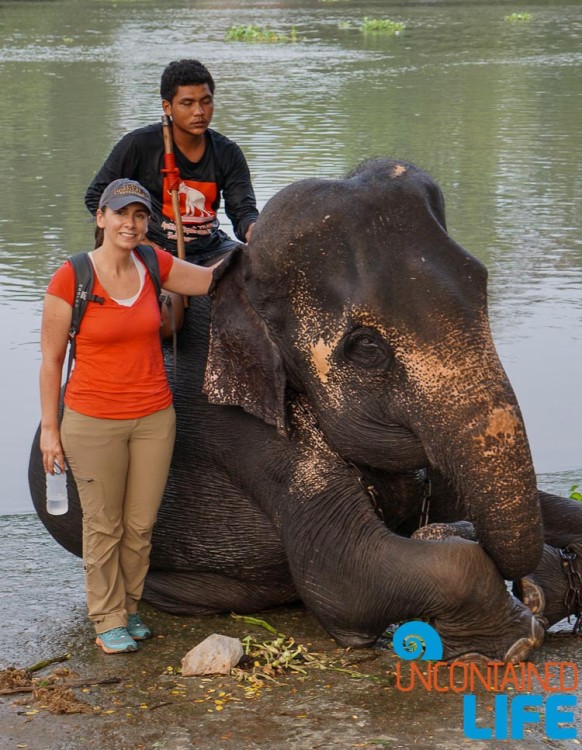 As our Thai hostess at San Sook Place Guesthouse wheeled our rental bikes out, her French partner pointed out key sights on a comically inexact map of the city. “There,” he announced, “is the historical park. There is the night market…et ici, another market you can go to tonight. And if you want to ride far…” he circled a spot on the map’s edge “…here you can see the Elephant Kraal. You can see baby elephants there.” 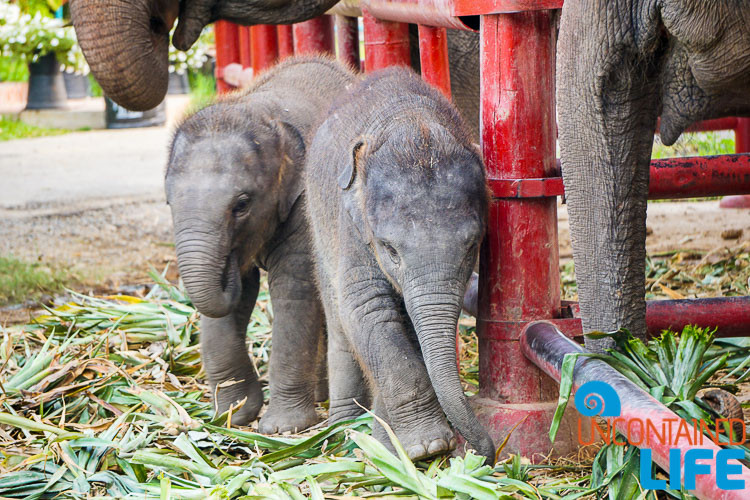 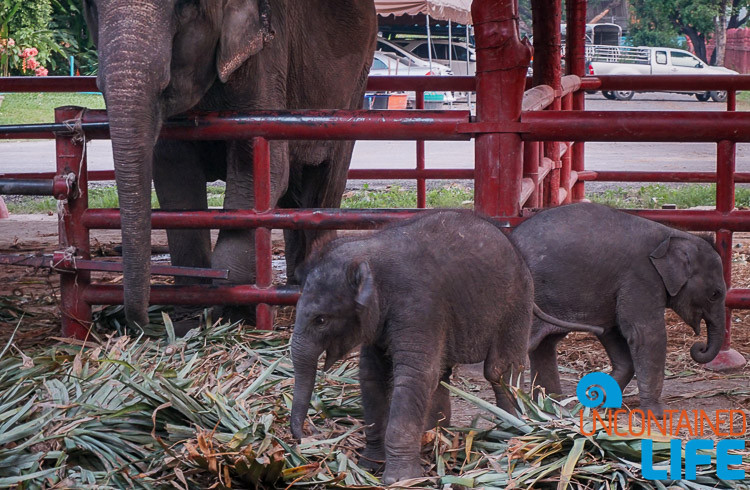 To put our reaction mildly, yes, we wanted to ride far. 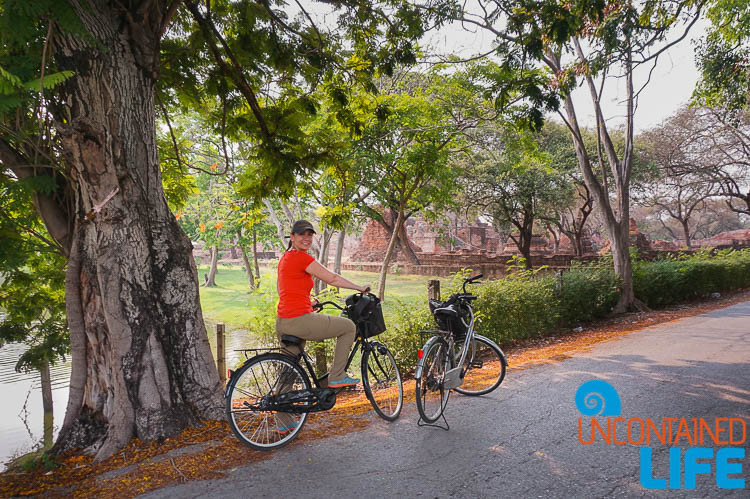 I will admit, as we peddled out, we had some mild feelings of foreboding. It’s not exactly news that some so-called animal sanctuaries in Southeast Asia are often…questionable in quality. To be fair, Ayutthaya’s Kraal, also known as Elephant Stay, doesn’t claim to be a sanctuary in the ways that Americans commonly understand the term. The elephants at Elephant Stay aren’t being rehabbed for release in the wild, and the herd is comprised mostly of working elephants (and their babies)–though the place also houses retired elephants and elephants who are considered “troublesome”–I.E. not fit for work. Still, we weren’t sure exactly what kind of living environment we would find at Elephant Stay–and if we’d be happy or sorry that we’d ridden the distance. 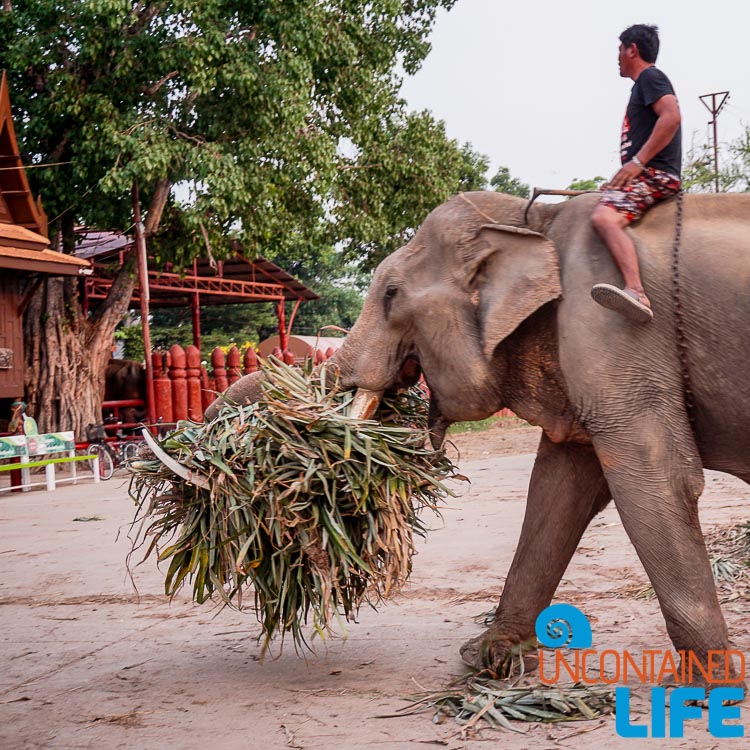 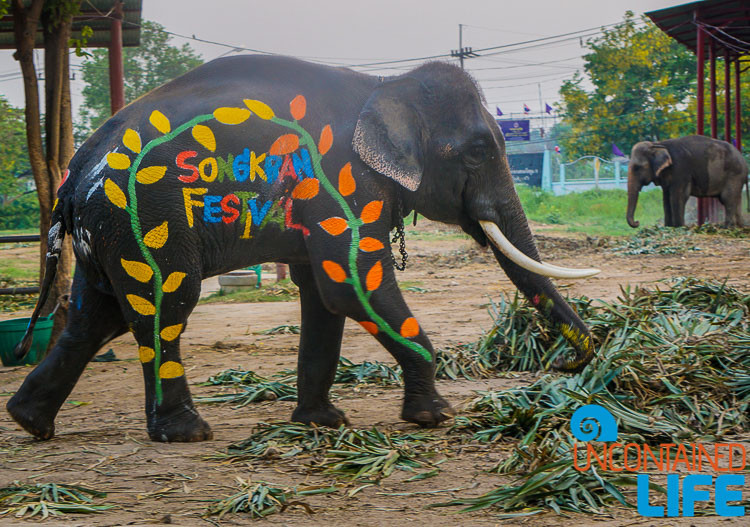 According to their website, Elephant Stay is focused on improving the working lives of elephants in Ayutthaya–not stopping Thais from working with elephants for income (something they claim is unreasonable given the human poverty, lack of land, and lack of money for elephants’ breeding and care in Thailand).

We must have been thinking pretty hard about these issues (or the heat really was getting to us at last) because after a short ride around the historical park, we decided to take a dirt road which appeared to cut directly across to the bridge which would take us over the river (the same Chao Phraya River we loved riding in Bangkok) and toward the Kraal. 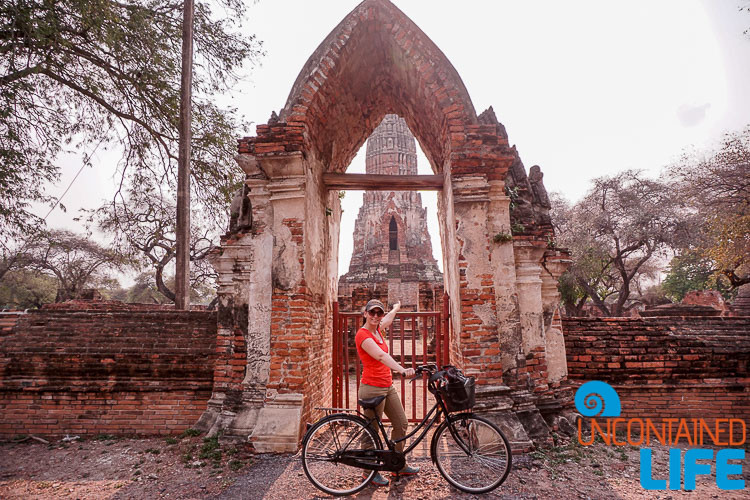 Only, as it happened, the dirt road may have quickly devolved into a tiny dirt footpath… and it might have gone straight through the middle of some ruins that were clearly not open to the public… and that could, in turn, have resulted in our having to lift our bikes (and ourselves) over a barbed wire fence in order to get back onto pavement…maybe. 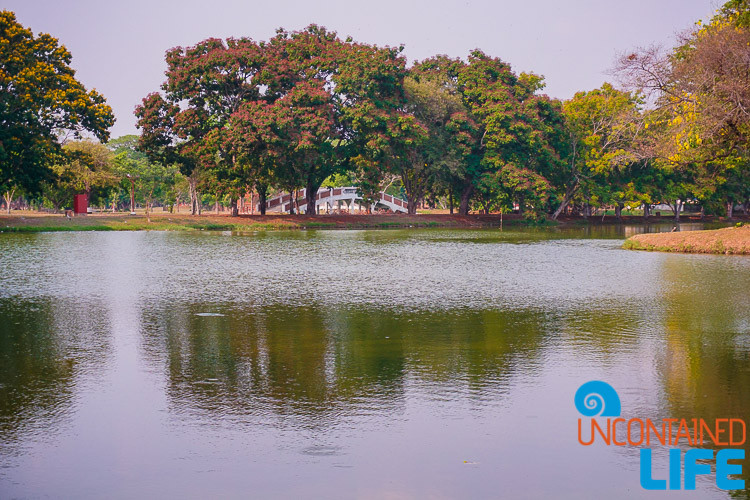 Whatever may or may not have happened, we did, in the end, cross the bridge and, after a brisk ride past gilded temples and through a number of small neighborhoods we arrived at last at the Kraal. Of course, we entered the wrong way (in our defense, signage was a bit dodgy). Rather than take the broad driveway that connected with the main road…

…we opted for the steep dirt path just beyond that led to the village next to the Kraal.

Watching us descend the road on our bikes provided a good deal of amusement (and rightfully so) for the village children–amusement which only increased when, quite abruptly, we found ourselves within arms length of an elephant walking next to her mahout (elephant rider). Let me tell you something that will utterly shake you to the core with its truth: elephants are huge. 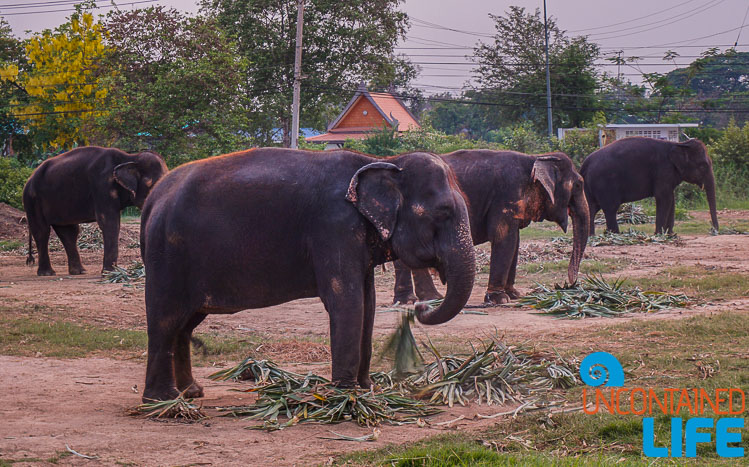 Ok, now that we’ve gotten past that, some other truths: in spite of their hugeness, elephants are also, when not being viewed from a distance, able to appear right at your shoulder, seemingly, from nowhere (much like Monitor Lizards). And I don’t care how many zoos you’ve visited or how much Animal Planet you’ve seen, nothing prepares you for suddenly finding yourself within a foot of a fully grown she-elephant who’s just walking along, free as a bird, on a narrow dirt road. It was amazing. It was terrifying. I was in love. 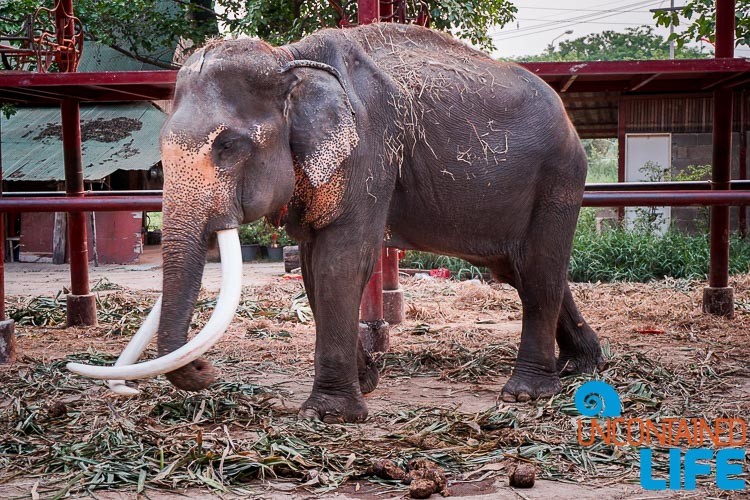 After walking our bikes to the real entrance (keeping a respectful distance from a bull elephant who gave us an appraising eye as he chewed his food) we paid the 50 baht photography fee (which is the only fee involved in a day visit) and started exploring. 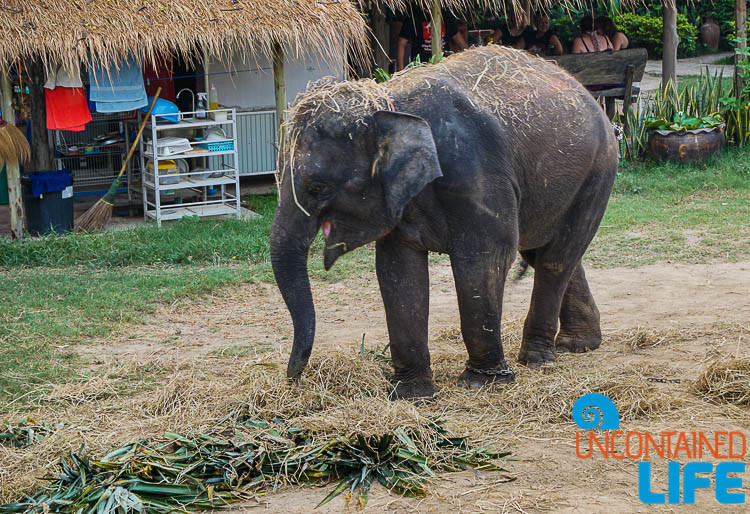 Elephant Stay isn’t really designed for casual visitors, so there isn’t much in terms of information about the sanctuary on-site. But the babies were there, as promised. And (be still my heart!) when they spotted us, they stopped their play, climbed out of the enclosure they shared with their mommas and came to say hello.

Which, apparently, in elephant-culture involves running straight at you and head-butting. 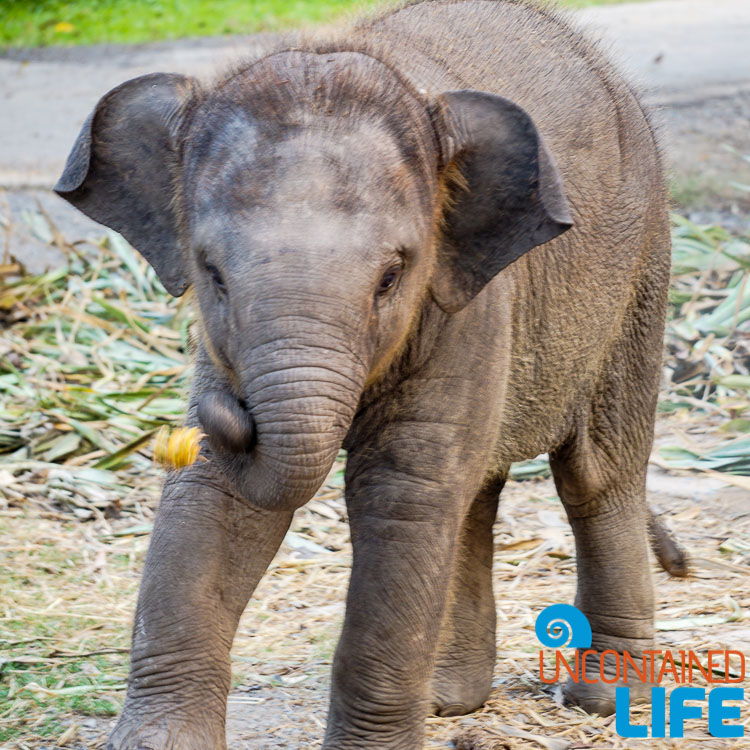 “You have to move to the side if they try to do that! If you don’t they’ll knock you right over.” A couple of Elephant Stay’s voluntourists came over. Voluntourists pay to stay in the village (in air conditioned rooms) for anywhere from 3 days to 4 weeks and to help take care of the elephant herd (in particular, the retired female elephants and babies). The program is expensive, but given that the funds go directly toward covering the elephants’ care and feeding (elephants eat upwards of 149 kg/ 330 lb. of vegetation daily), the cost makes sense. 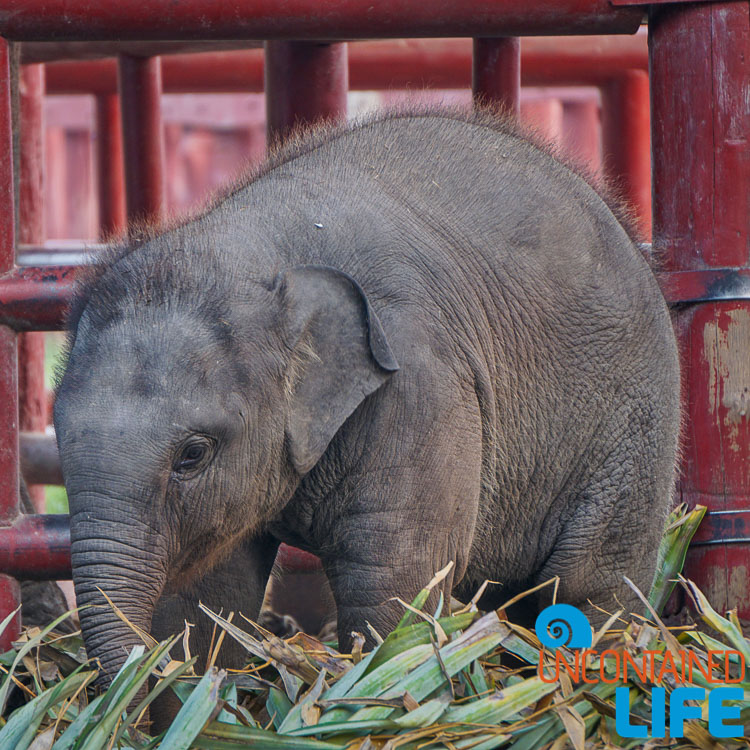 The two visitors (a mother and daughter) were from Melbourne, Australia–one worked at a zoo, the other ran a small animal rescue from her home. We asked them about the experience of staying and working with the elephants. “It’s a dream come true,” the mother, Kay, replied. We asked about some of the things that, to our eyes, seemed questionable: the takaws (bullhooks) carried by the mahouts which have been framed as torture devices in western media, and the chains which most of the adult elephants wore around one ankle. 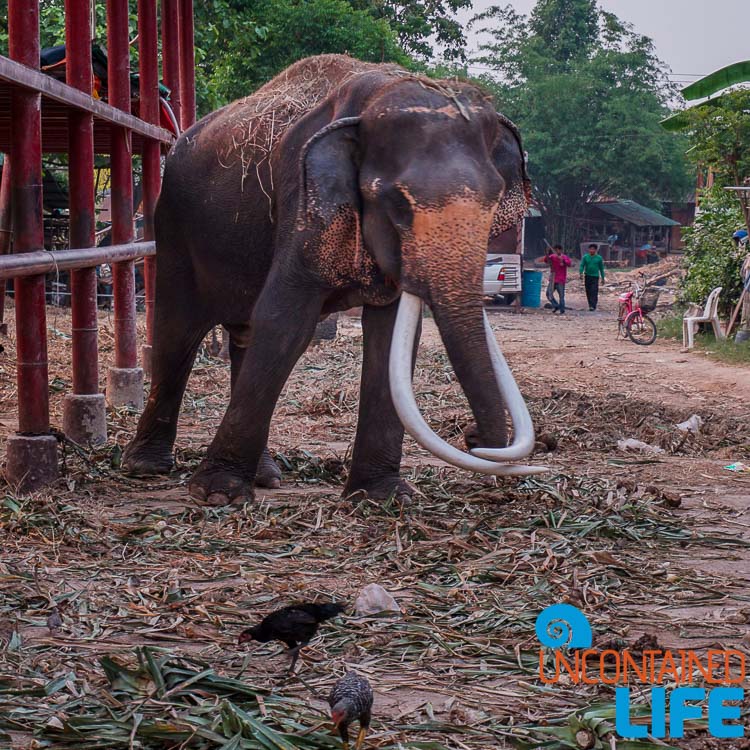 Kay’s daughter, Haley explained that these things had troubled them too when they first arrived, but the knowledge they’d gained during their stay, coupled with their own observations changed their understanding. “We’ve never,” she told us, “ever seen an animal being abused during our time here. If anything, the mahouts treat their elephants with a level of love and respect that goes beyond anything I’ve seen working in a western-style animal care environment.” 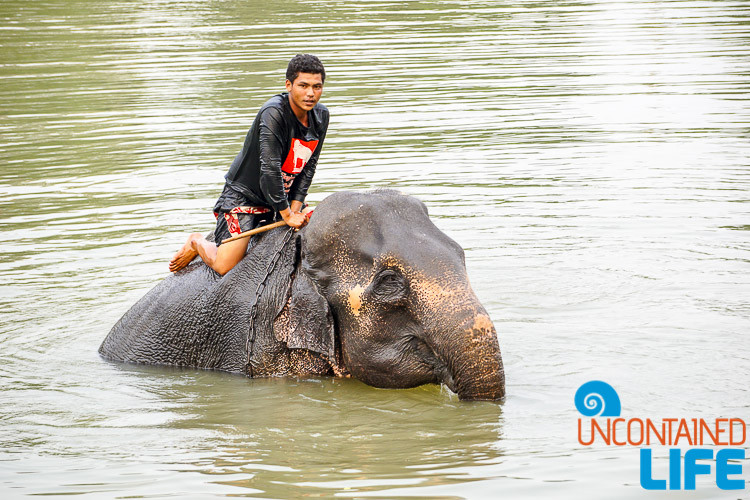 The Elephant Stay’s website addresses these controversial issues directly, but it was good to hear their claims that the elephants are (by all appearances) happy and well cared for confirmed directly from two volunteers–and experienced animal care-givers at that! (You can read about other volunteers’ experiences on Trip Advisor, or, for a longer account you can check out this story on Perceptive Travel.) 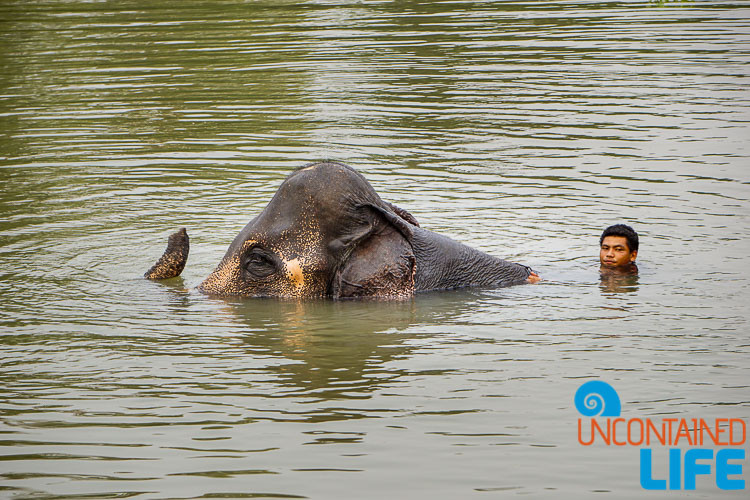 After taking a short walk down to the water to watch the elephants enjoy a bath in the river with their mahouts (who, we saw, are training up the next generation)… 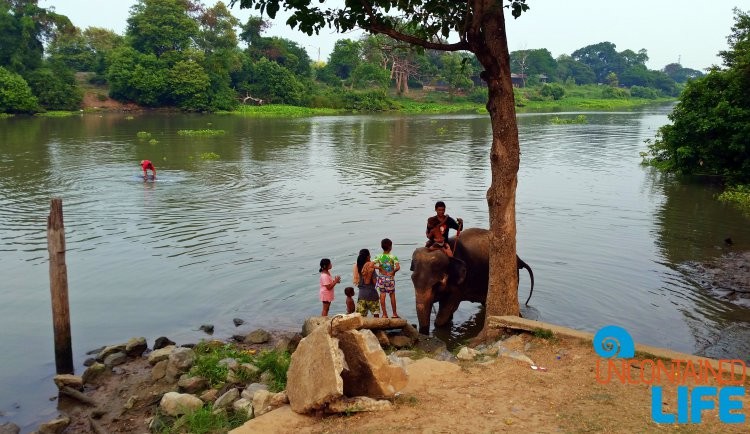 …we headed back toward town in the growing twilight having added another unique animal encounter to our Thailand experience. Just watch out for those babies if you visit  Elephant Stay Ayutthaya yourselves. That cute will have you wishing for a bigger suitcase. Just kidding. (Maybe.)

For more pachyderm entertainment, watch our video of the Ayutthaya Elephant Stay!

Location: Easiest way to visit is via tuk tuk (just tell them “Elephant Stay” and they’ll know where to go), but if you’d like to follow our biking route, either plug the Elephant Stay coordinates into your google maps (which is what we did) or follow these directions (compliments of OneWeirdGlobe.com): from Ayutthaya’s main tourist street, take a right (west) onto Naresuan. Go about 900 meters to Chikun road, and take a right (going north). Cross Uthong road and over the water, then make your first right. Bike about 1 kilometer until the road ends in a T, then take a left. Take the right fork 150 meters away, then follow this road for about 1.5 kilometers until you see the elephants on your right.

Cost for Day Visitors: free or 50 baht if you want to take pictures. For volunteer package prices, click HERE.

9 Responses to Should You Visit Elephant Stay Ayutthaya?