By UncontainedLife on September 11, 2017 in Blog, North America 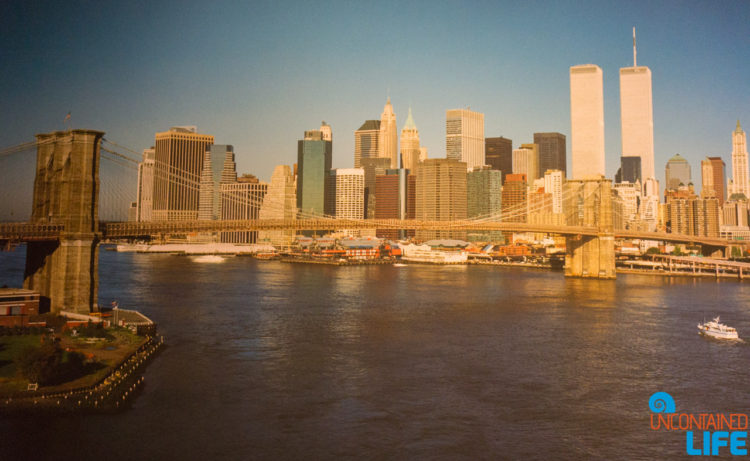 I visited New York’s Twin Towers for the first time in the early 1990’s. Unlike the Empire State Building which puts metal mesh between you and your view of the New York skyline, the Tower’s outdoor deck offered 360-degree views with no obstructions (especially important when you’re a pint-sized tourist). For whatever reason, I didn’t visit the Towers again after that day. I never even really thought about them again, actually, until 9/11 when, together with my school-mates, we watched them fall again and again on TV. 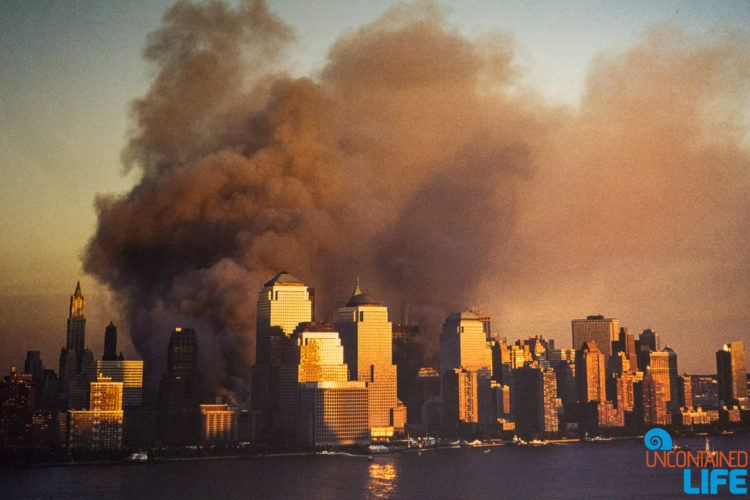 The 9/11 Memorial was dedicated in 2011, and the 9/11 Museum first opened in 2014. But it wasn’t until this past December that I finally returned to the spot where I had my first view of New York City from above. I can’t say exactly why I didn’t visit the 9/11 Museum and Memorial earlier. Maybe it was a sense that that place, that memory didn’t belong to me. After all, no one I knew had died. Is the memory of seeing something happen from thousands of miles away, on a 32″ TV screen the same as actually remembering the thing itself? 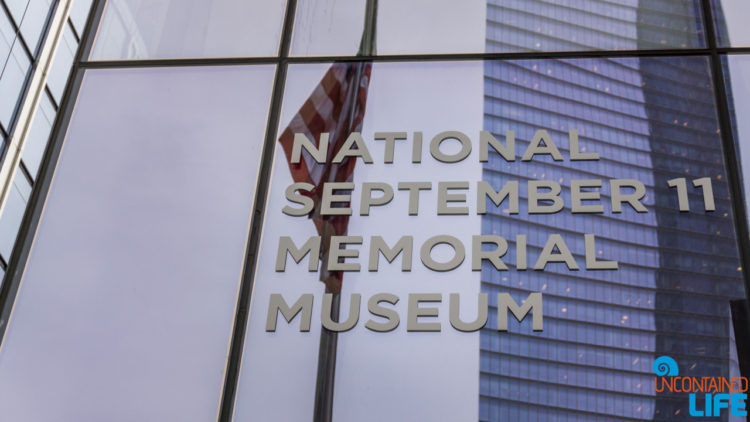 In any case, on a rainy December morning, I found myself exiting the subway and making my way toward Ground Zero. 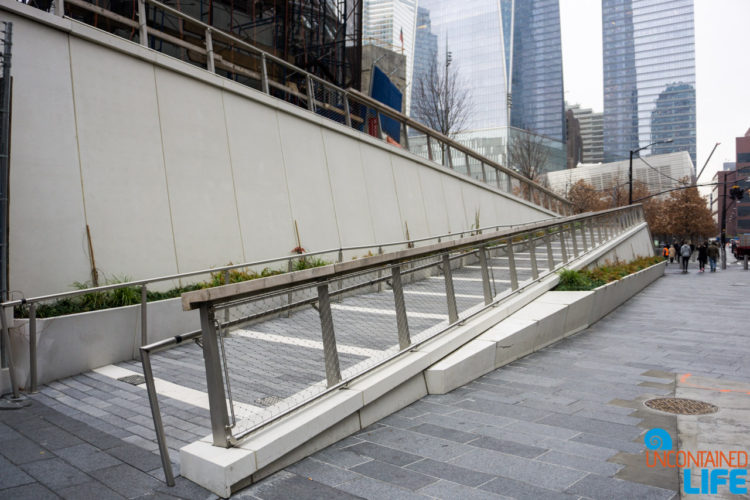 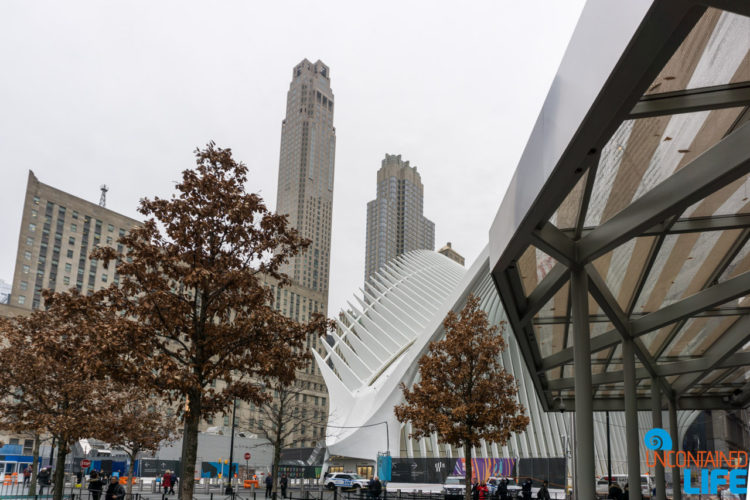 The bad weather meant thin crowds outdoors around the Memorial Park and lined up outside the 9/11 Museum. And the space, generally, felt grim. As Justin and I made our way toward the South Tower memorial pool the sound of rushing water rose. I ran my hand along the plaques naming the 9-11 victims which surround the pool and let my eyes skim across the space where the water fell, not wanting to actually follow the fountain into the void. The thought came, suddenly and unbidden: this was where I’d stood all those years ago. Somewhere in the middle of this depression in the earth…only up in the sky. 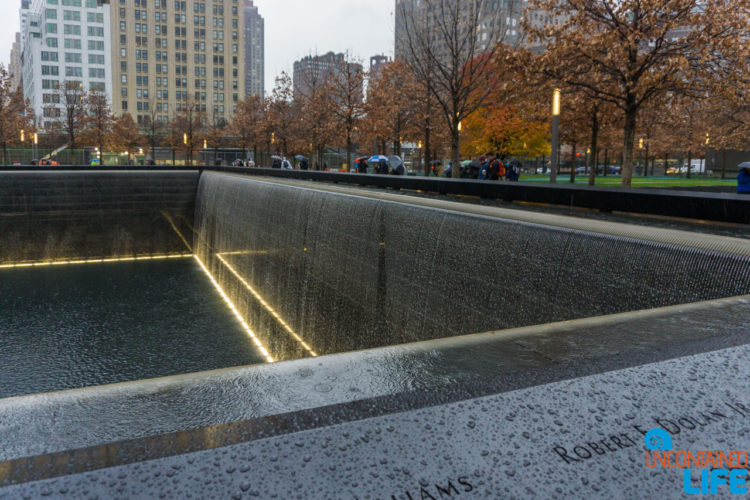 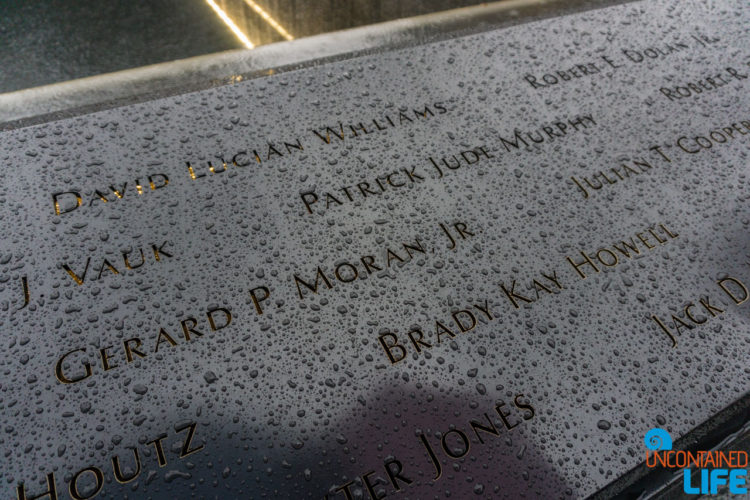 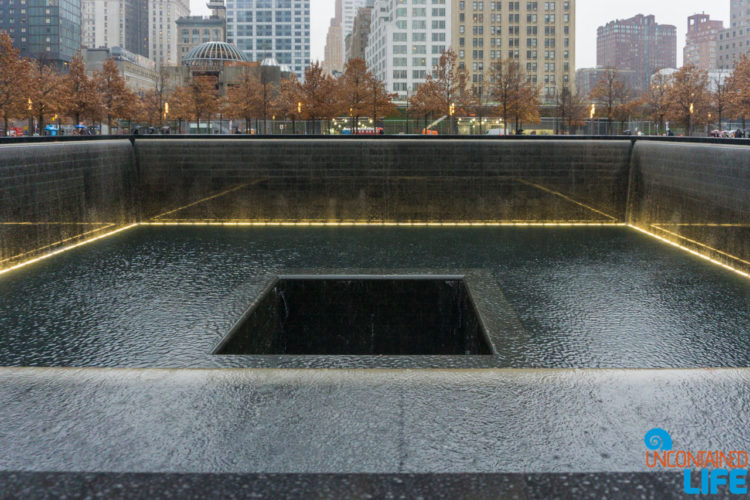 We turned then and walked toward the 9/11 Museum entrance: a sleek modern structure which ushers us in and down like Orpheus entering the underworld. Daylight turned to darkness as we descended past the 80-foot tall steel columns which were once part of the North Tower’s facade. 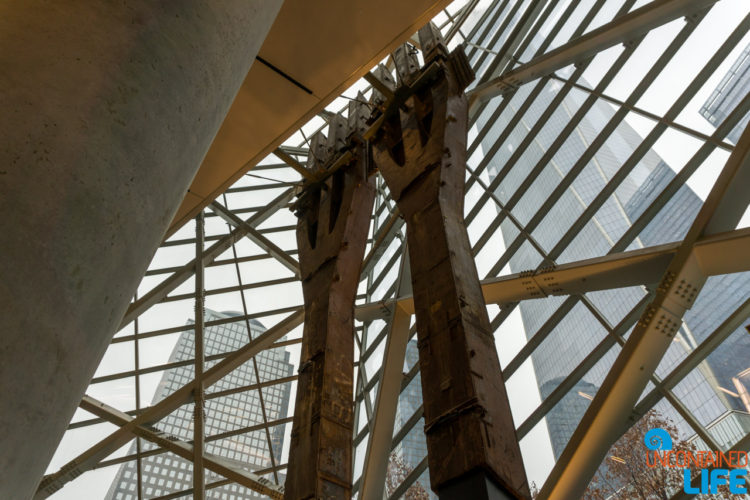 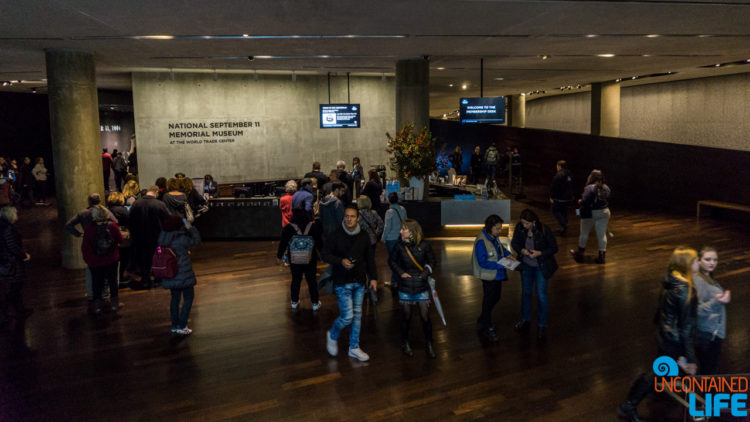 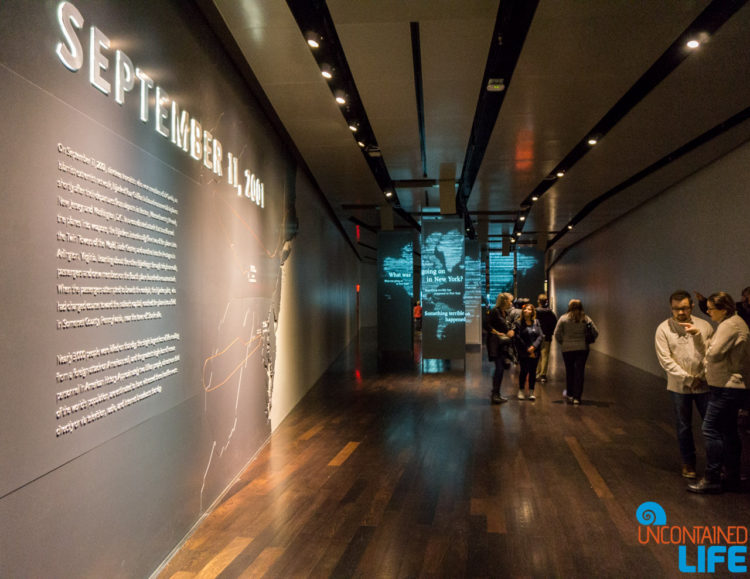 A wide ramp led to an look out point over the Foundation Hall. To our right, we could see a part of the original slurry wall, which held back the Hudson. And, in the middle of the Hall, another column–the last which was removed during the 9 months-long effort to recover victims’ bodies from the wreckage. 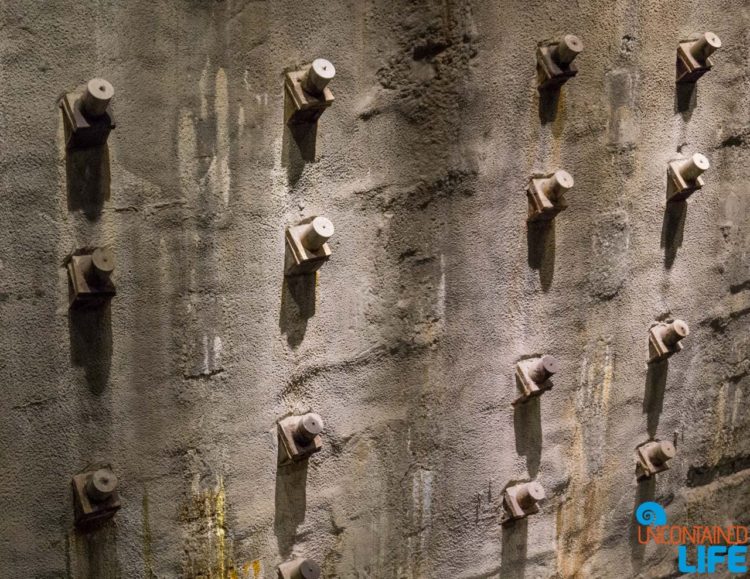 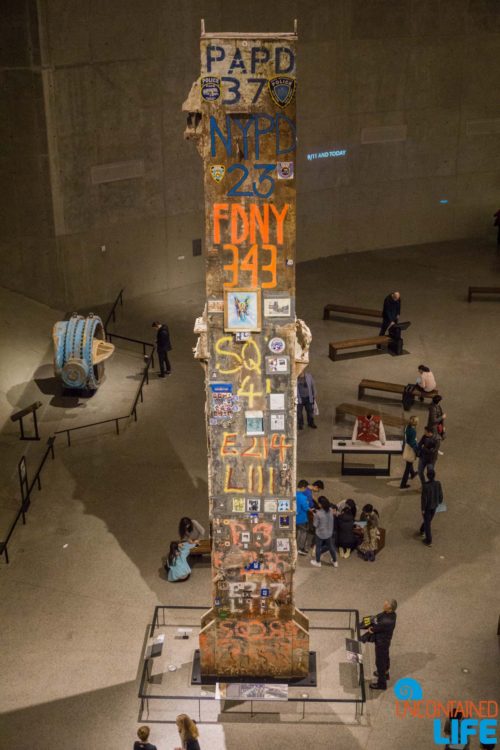 As we stood surveying the Hall, a man to my right began recounting his memories of the day of the attack to the people he was with. He was one of the many walking near the towers when the planes hit. He recalled standing and watching in shock as the second plane crashed. And, later, running from the choking clouds of ash and dust which swept through the city when the first tower fell. “I thought…this is it,” he said. “I’m going to die. And I thought…maybe there was other things happening too…not just the planes. Maybe we were being bombed. Maybe all of New York was being blown away.” 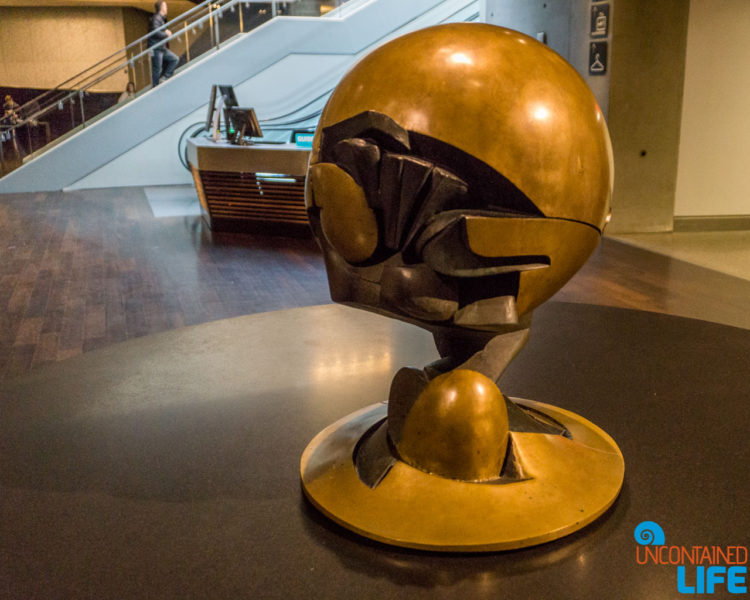 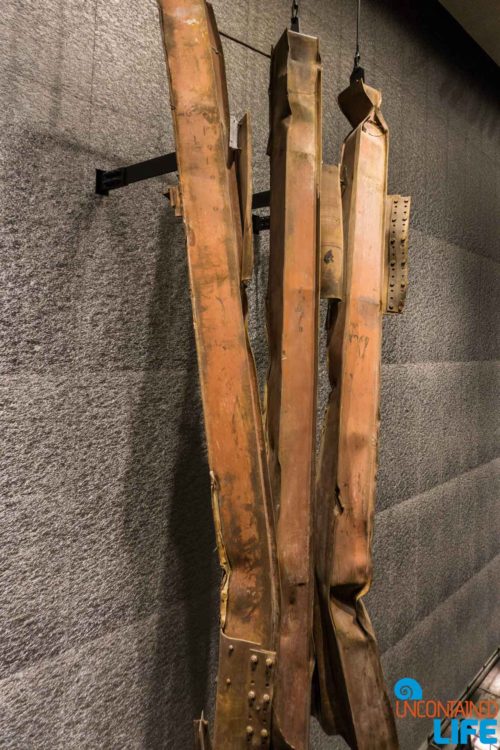 At the end of the ramp, we found an escalator leading down to the Memorial Hall which paralleled a broken flight of stairs. These stairs, now called the “Survivors Stairs,” provided an escape route for people fleeing the towers. They were the sole part of the “above ground” part of the World Trade Center to remain intact after the towers fell. 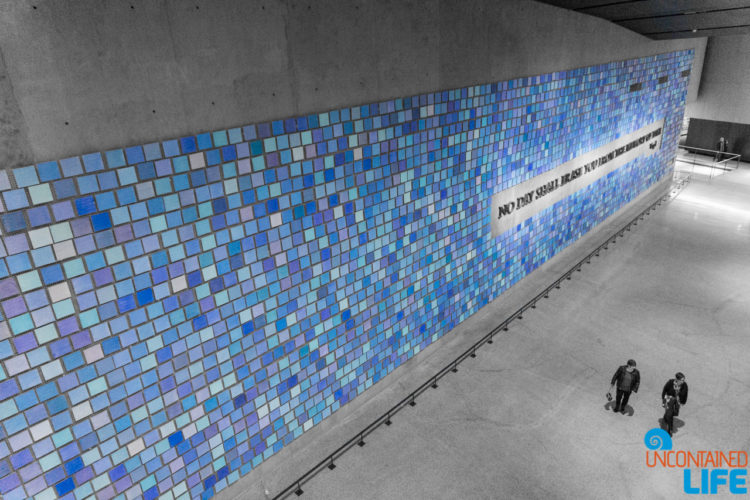 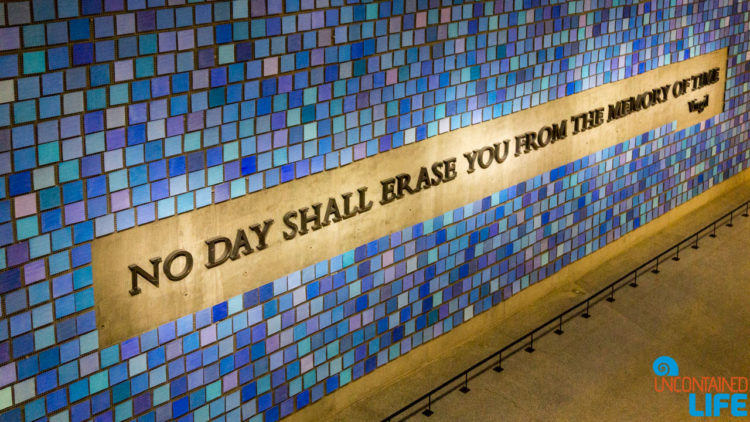 The long blue wall running along the side of the Hall, between where the two towers once stood appeared, at first glance, to be made of tiles. Closer examination, however, revealed each square to be slightly different in tone–each its own unique attempt on the artist, Spencer Finch’s part, to “remember the color of the sky on the morning of 9/11.” I closed my eyes for a minute, trying to think of the color of the sky on the day I stood at the top of Tower 2. What comes to mind is a photograph: a picture taken of me on the Observation Deck. In that photo sky in the background is a clear, pale blue. But here was the problem once again, I thought to myself. The memory was of an image, rather than the thing itself. The sky on that day was like a story I’d been told. The color filtered through a lens, burned onto paper, pasted in a book. An echo of the past. 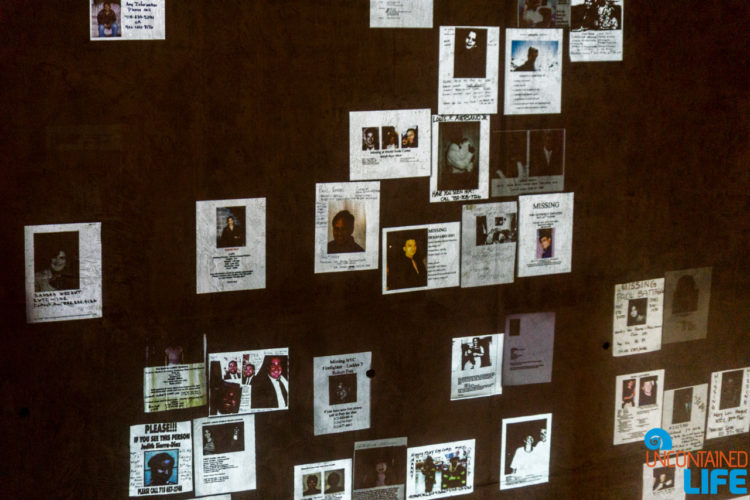 The centerpieces of the 9/11 Museum are the actual exhibit halls: the first shows the faces of everyone who died; the second presents the “history” of 9/11 via a collection of documents, physical artifacts, photographs and video footage, and interviews. As we walked through what happened on that day, the events leading up to the attack, and, finally, the aftermath, my thoughts kept returning to the question of what true remembrance entailed. 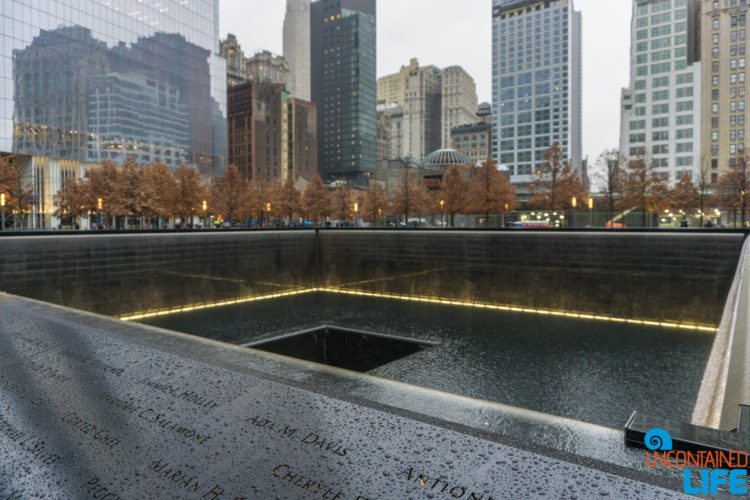 I thought back to the memorial pools–those endlessly falling cascades which keep the sense of loss present. Present, but not personal. The pools were the big picture: the sweeping view of 9/11. But here in the exhibits, surrounded individuals’ former possessions (a pair of dust-covered high heels, a half-charred rolodex), by the images caught by photographers and videographers (figures holding hands, jumping from windows, a shaky shot of first responders entering the tower lobby), by the recorded voices of the living and the dead (stories about smoke and fear and logic-defying heroism of everyday people) there was more than grand-scale sorrow. These were the individual squares of sky. The flashes of color in the midst of the darkness. 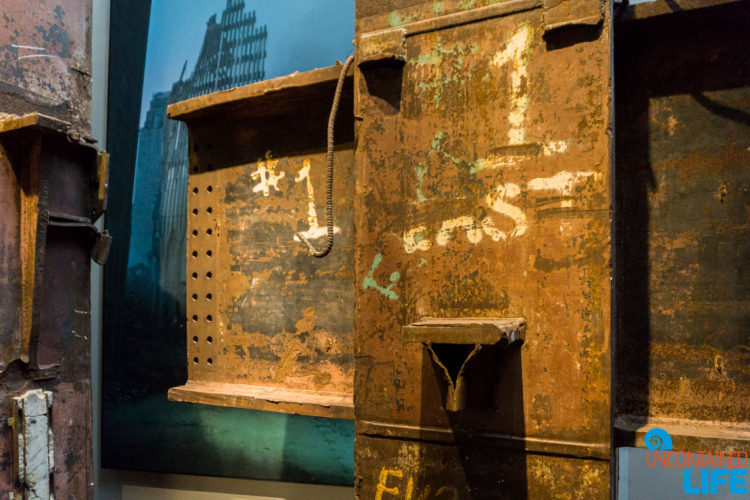 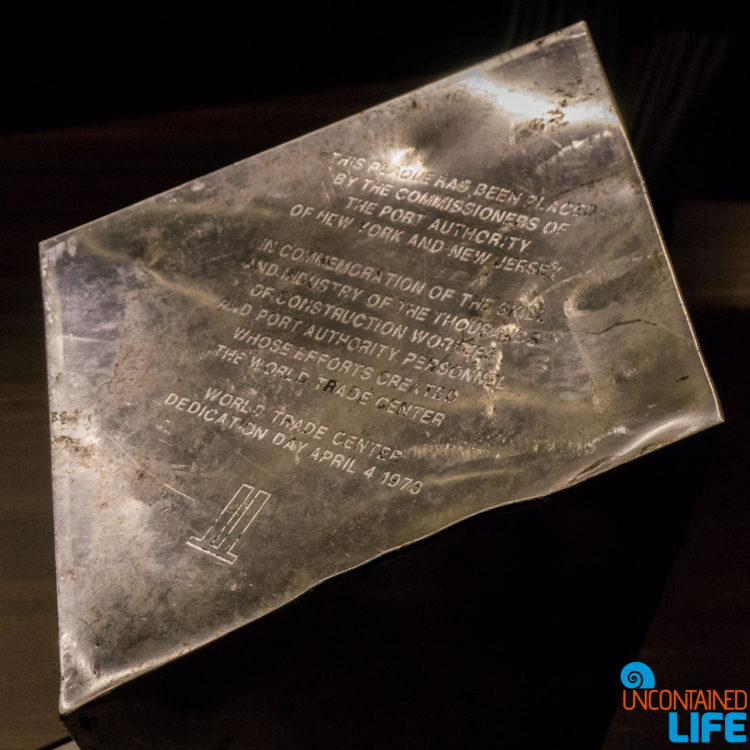 Here, the precious quality of small moments were memorialized–crystalized by the tragedy surrounding them. And those moments are what we, the living, can hold onto. They are what we can carry with us. They are what I carried with me–tucked in my memory next to the image of a little girl on a white rooftop–as we rose up out of the 9/11 Museum, and returned to New York’s rainy streets. 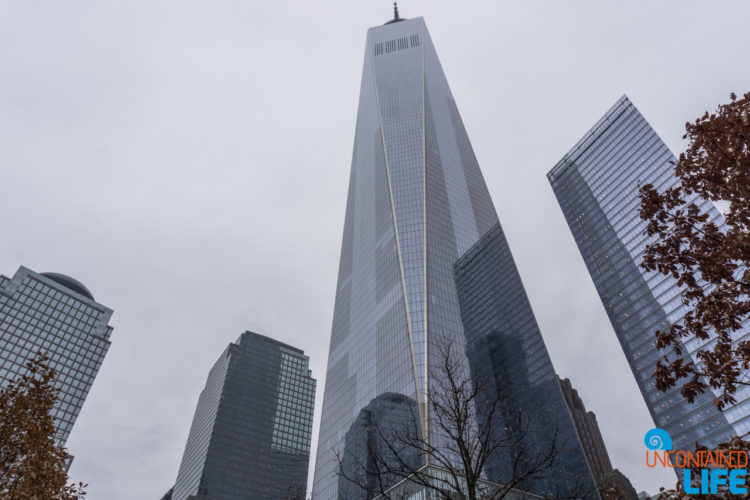