By UncontainedLife on August 4, 2015 in Asia, Blog, Destinations 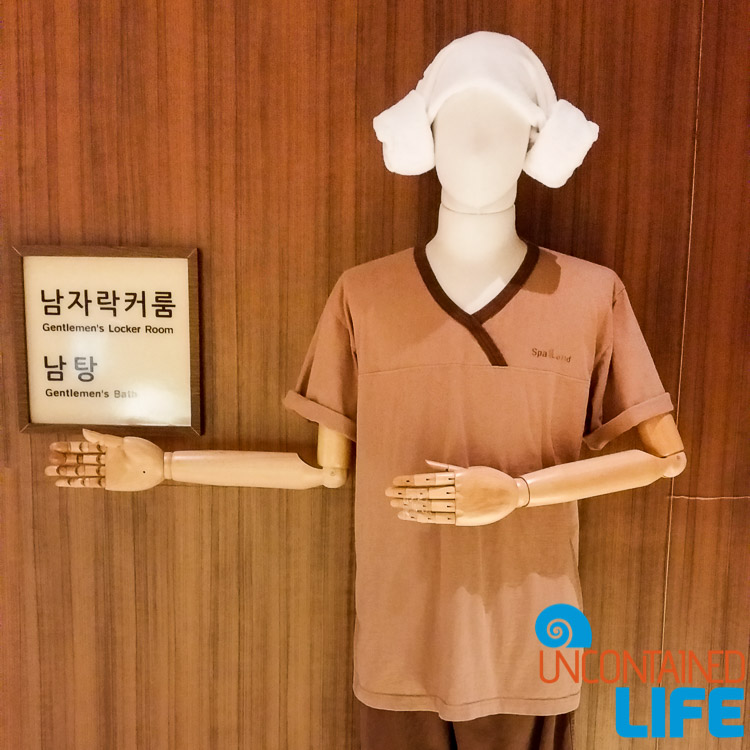 Is visiting a Korean Spa on your travel bucket list? Right this way, then…

We’d been in Korea for two weeks, and I had become an expert at reading the Korean symbols for pork BBQ, beef BBQ, and fried chicken with beer. (Alright, most of the restaurants have an illustration of a happy pig, a happy cow, or a happy chicken with playful beer stein so when I say “expert,” I simply mean, “not an idiot.”) 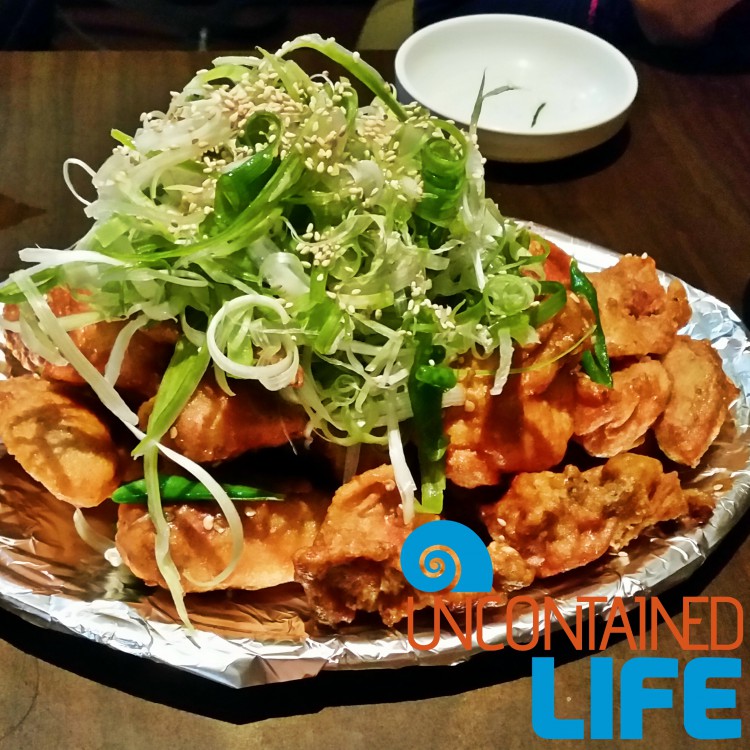 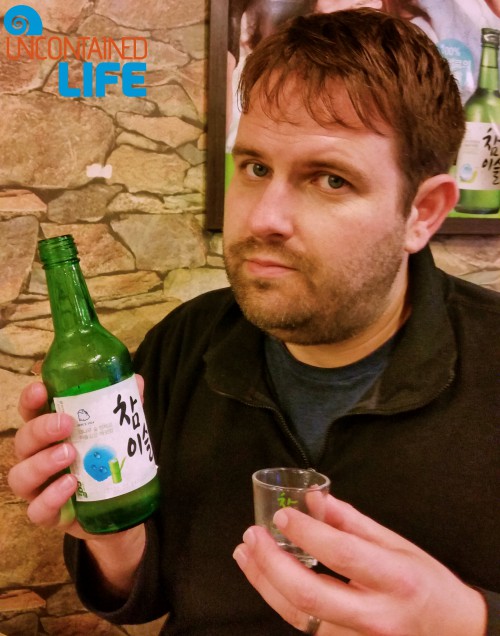 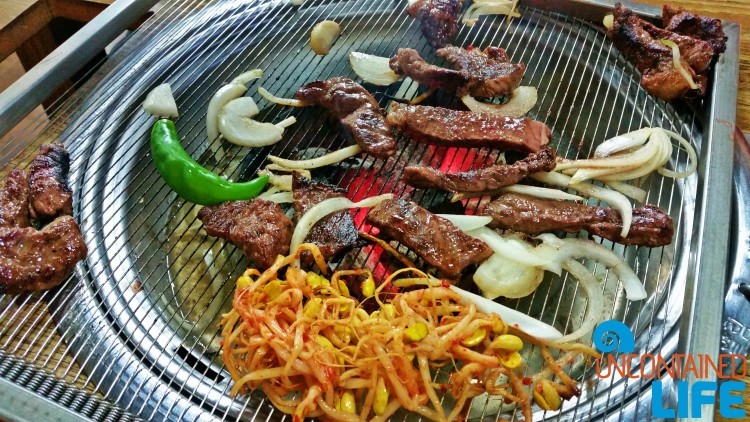 Yes, I was happy traveling from one beautiful meat-serving joint to the next. Heck, I could even get some sightseeing in because what can you find to eat when you go to a professional Korean baseball game or a national park? That’s right.  BBQ and fried chicken (with soju and beer). 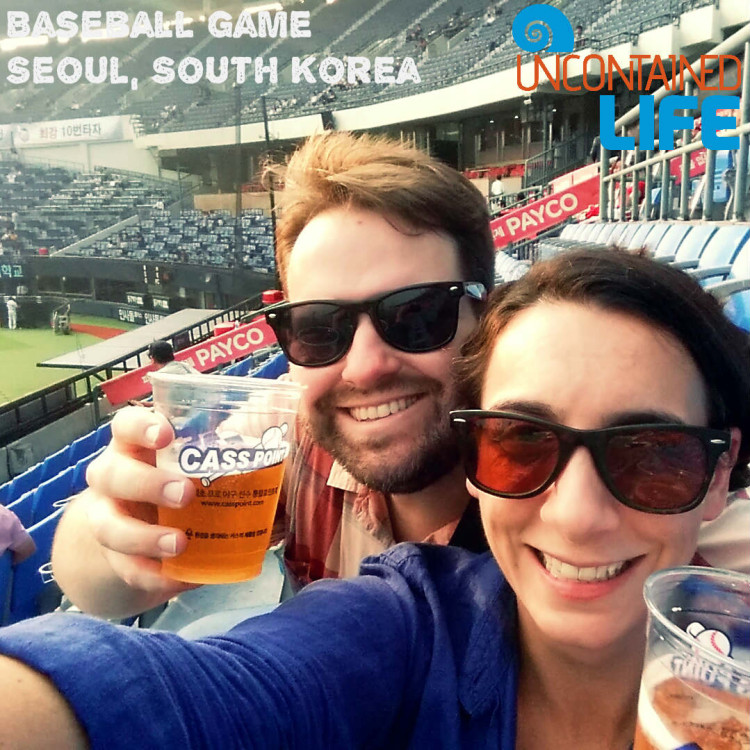 But, then, my wife suggested that we go to a Korean Spa.

I’m sure you’ve guessed her response. 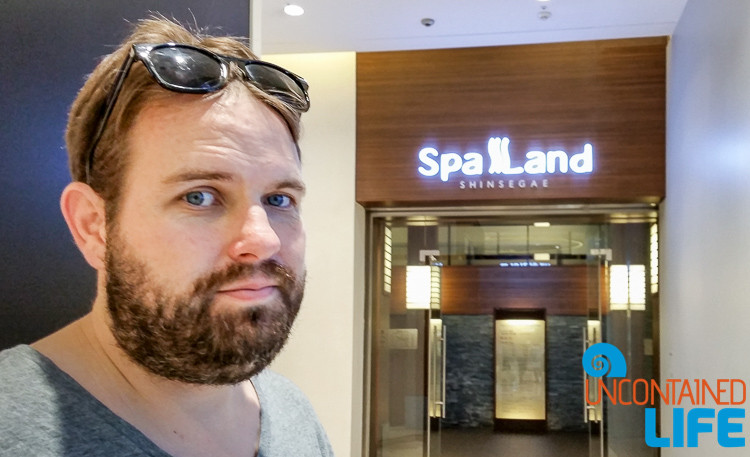 For those of you unfamiliar with Korean Bathhouses, they are quite unique. There are places to sleep, foot baths, hot spring pools with minerals that supposedly do something to/for your epidermis, massage therapists, full body scrubs, barbers, multiple saunas, and all kinds of other features designed to help you relax, detox, and refresh.

Oh yeah, one more thing. For the baths and steam saunas portion of the experience, no clothing is allowed.

Before you peeping Toms book your flight to South Korea, know this: the clothes-free sections of the spas are gender segregated. In all the common areas, you are wearing comfy spa clothes (provided by the establishment) that somewhat resemble hospital scrubs. 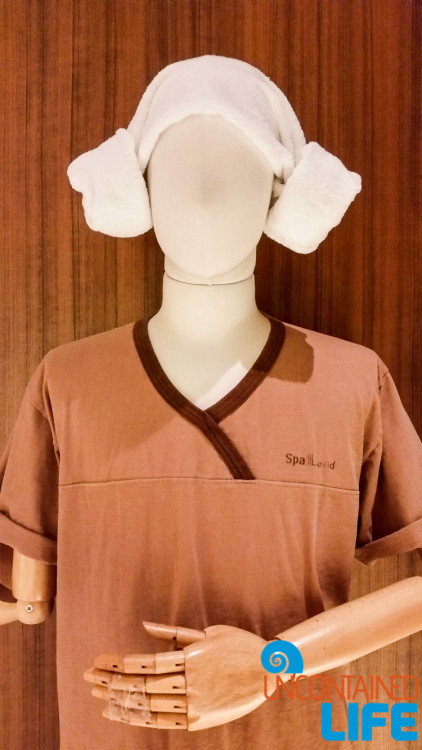 Butt, back to the naked (see what I did there?). Let me give you a quick rundown on how how it works. Note: some of these instructions may be specific to the spa we visited, but the general “flow” is consistent, whatever spa you visit. 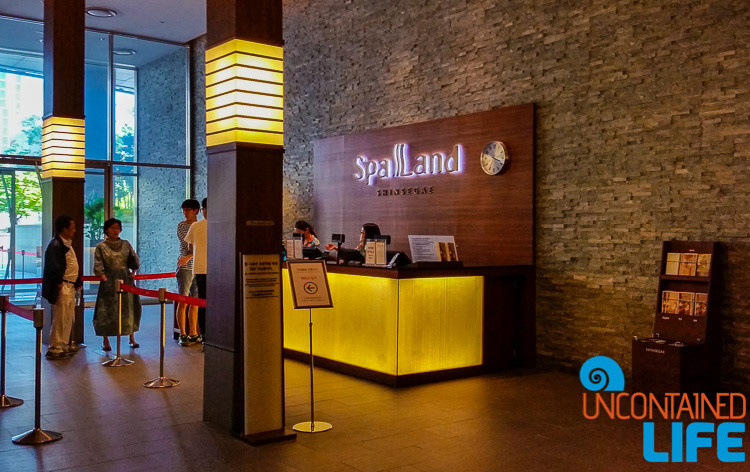 STEP 1: Arrive at the spa, pay your entry and receive a receipt with a locker number. 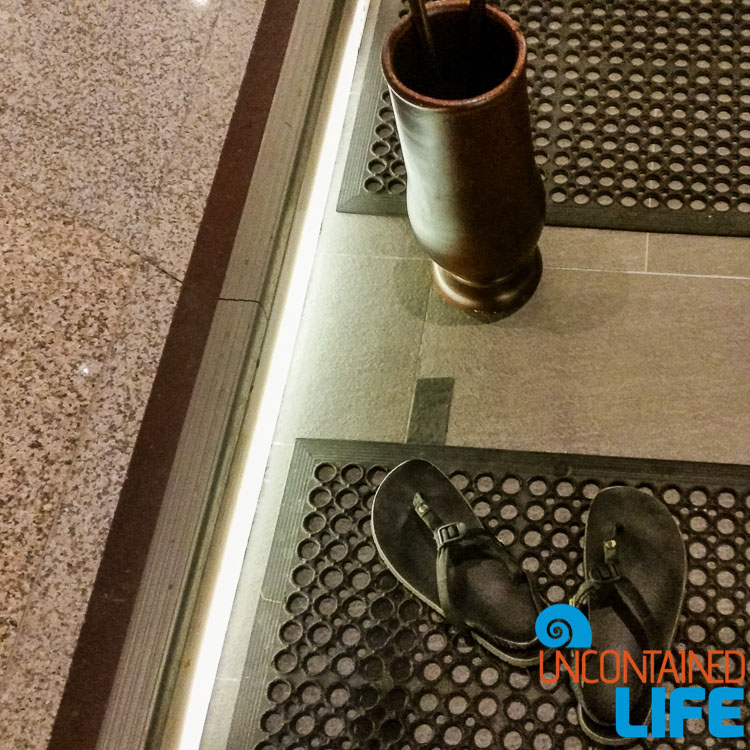 STEP 2: Take off your shoes (or in my case, my Lunas) and place them in the shoe locker corresponding to your receipt number. This locker has your key (with your locker number) so you lock up your shoes, take the key and enter the reception area. 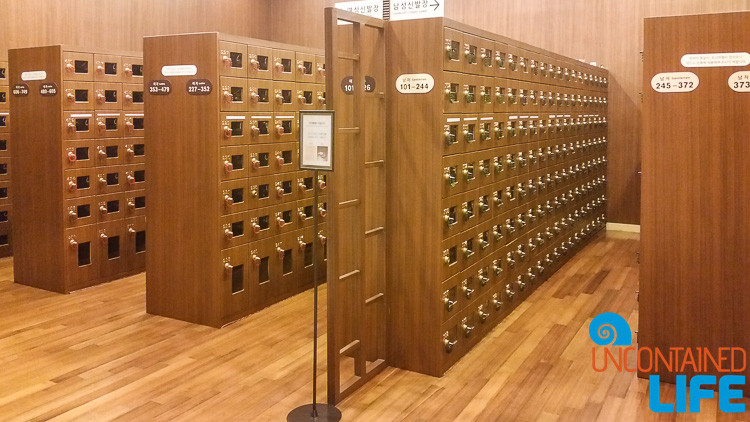 STEP 3: At the reception area, pick up your spa clothes.  The woman at the counter will look you up and down and then promptly retrieve the exact size spa clothes you need. If you have valuables you want to keep extra safe, you can also use a key-code locker that remains in sight of the staff and CCCTV. 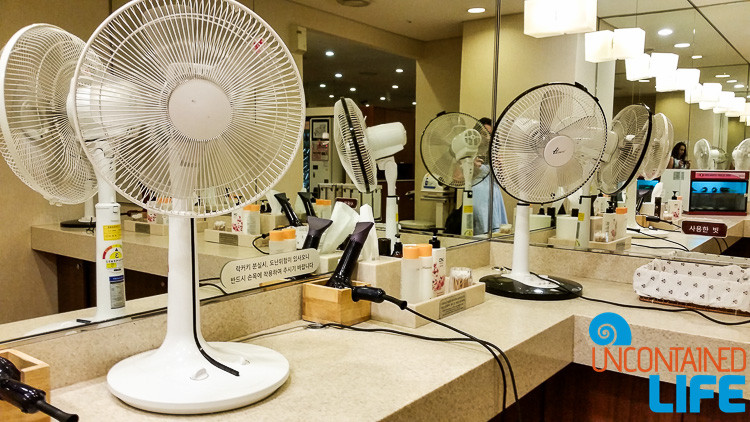 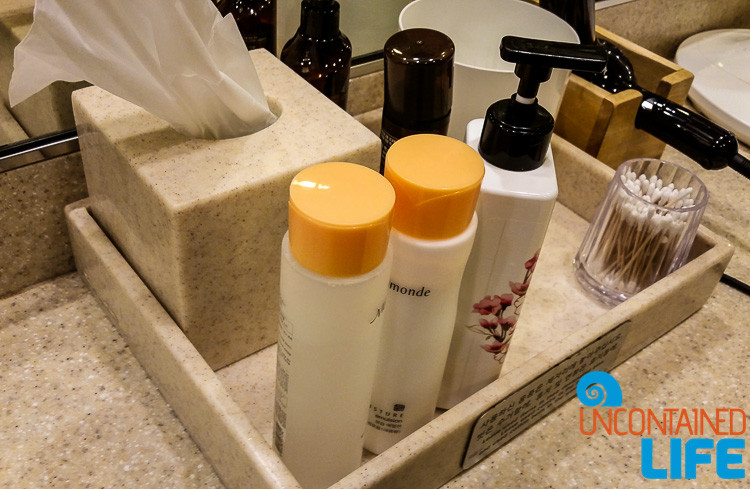 STEP 4: Enter the gender specific changing locker rooms. I can only speak for the gentlemen’s locker room, but the locker room has rows of lockers, a barber shop, bathrooms, a “powder” room where you can use use face wash, lotion, blow dryers, and hairspray to make yourself camera ready after your time at the spa. You find your locker number and then you have a choice:

Hillary and I had agreed to meet in the common area so we could experience the plethora of dry saunas as well as the outdoor foot baths, and relaxation areas together. 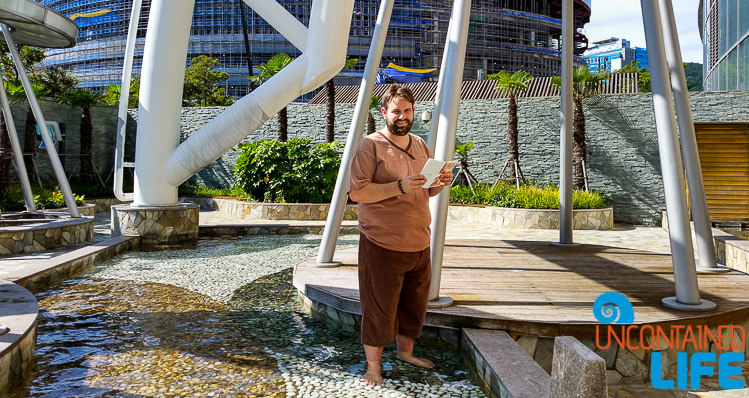 We started with the foot baths. The two primary baths featured sodium chloride and sodium bicarbonate. These minerals in the waters are supposed to do something nice to your feet, but I think the real “treatment” is the pumice-like stones they have on the bath floors–basically, sandpaper for your soles. The tiny round stools provided for sitting were less than comfortable, so, for most of the time, I walked back and forth in the baths. (I’m pretty sure the regulars got a kick out of this.) 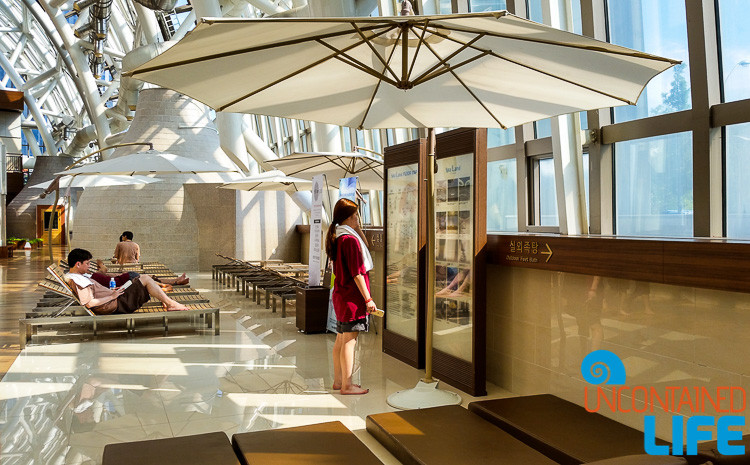 After our feet were bathed to the fullest, we decided to systematically try the dry saunas. The basic premise, I quickly discovered, is “hot room.” 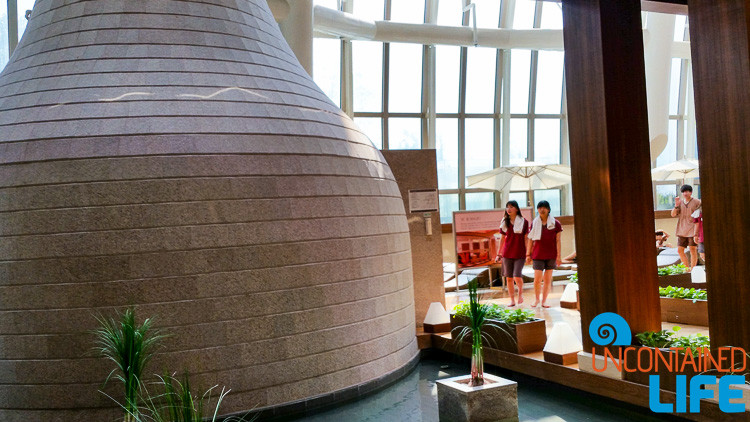 A hot room with bench seating; an even hotter room where you lie down on a marble floor and use a block of wood for a pillow; 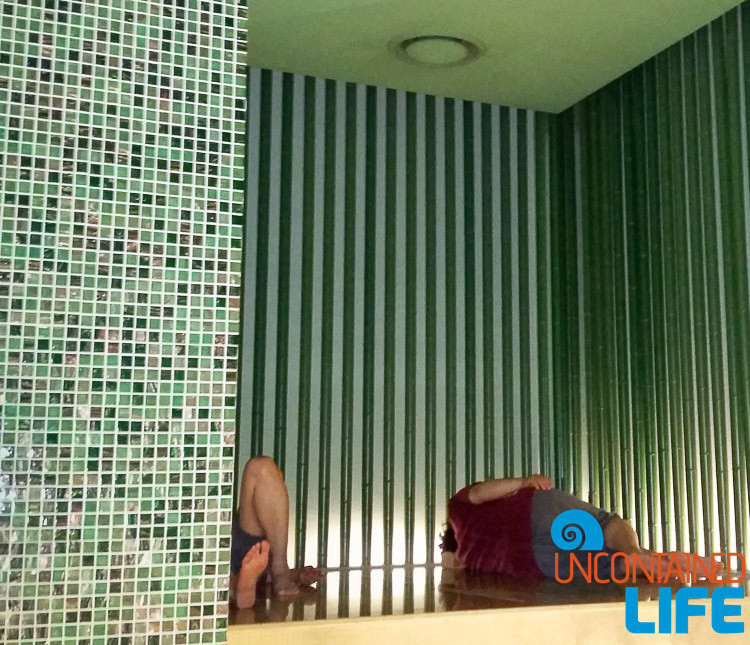 a room with a matted floor so hot that you could fry an egg while sauna-ing (I create words); another hot room with low ceilings where you lie down on a bamboo floor and use a block of wood for pillow; 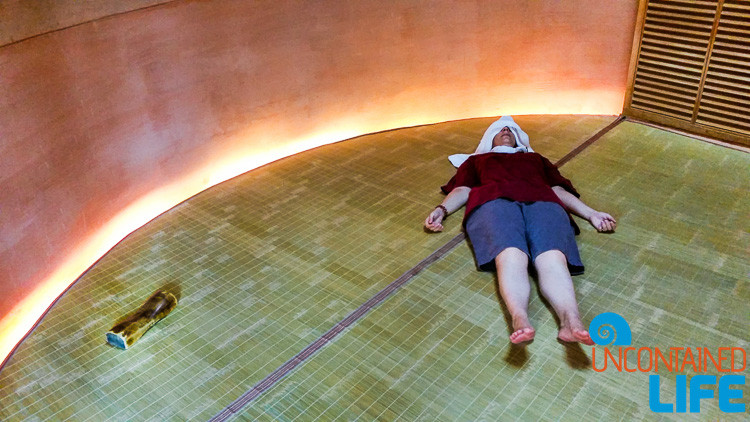 and, finally, another room so hot that you’ll think longingly of being the egg you fried earlier. 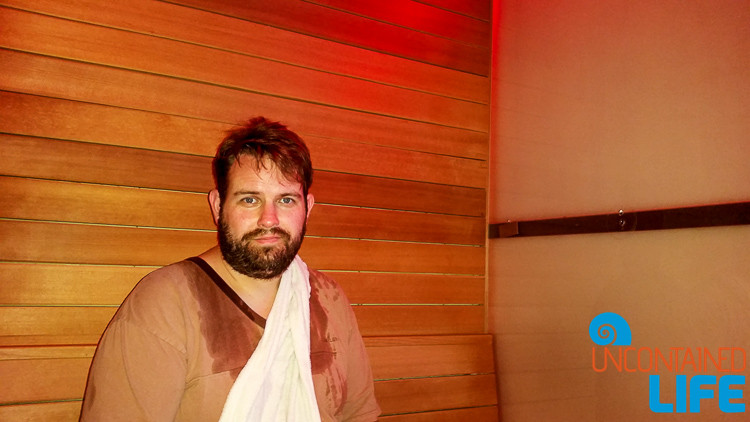 One sauna room had ocean sounds, another, colorful UV lights. But, my favorite sauna was…not really a sauna. It was an ice room: blue and white tiles, comfy benches, an aquarium with fake jellyfish, and glorious coolness…so, basically a room with an air conditioner. 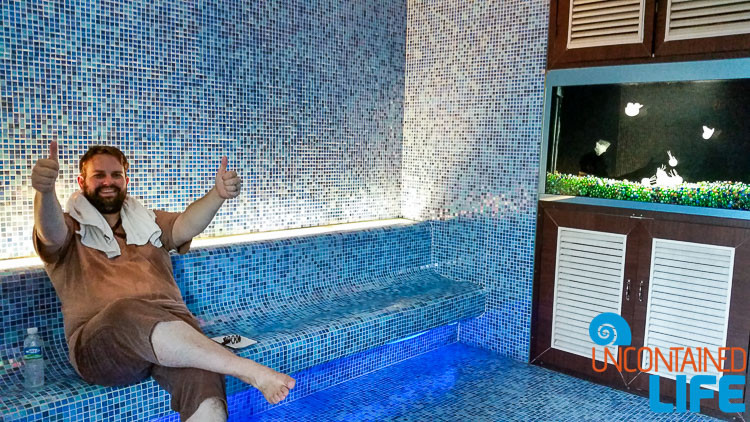 If I had my ‘druthers, I would have stayed in the ice room the entire time; preferably with BBQ and beer. Supposedly, each sauna room has different attributes which can produce different health-altering results. (I’m pretty sure the only difference was the temperature, but perhaps a charcoal floor, 65 degree pyramid, or a clay igloo will make you whole? I’m going back to the ice room.) 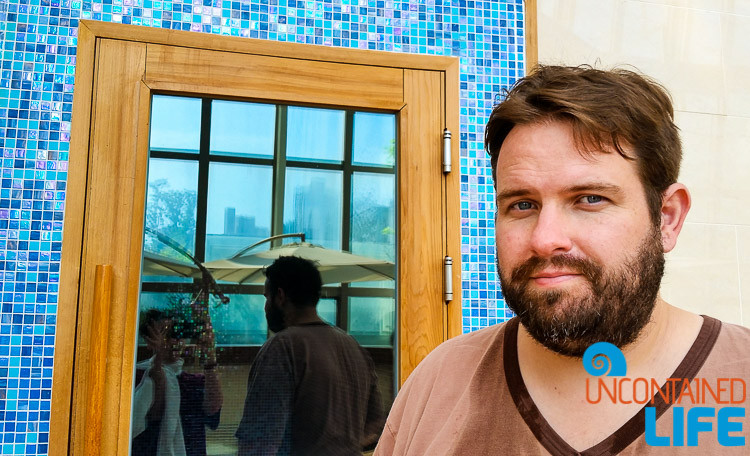 We then toured the resting rooms (different than the restroom), one of which featured fancy Japanese sleeping chairs complete with personal  HDTV and chair-side service from their cafe with (considering this was a health spa) surprisingly non-healthy food and drinks…including an egg (fried chicken in training). 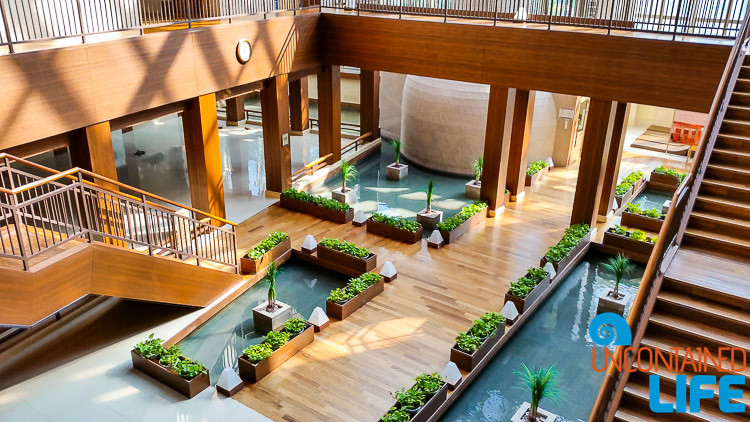 There were private massage areas, oxygen tanks (it is ironic that these capsules that produce life-giving oxygen look like coffins), wood therapy (it’s like being in a forest??), facials and electric massage chairs. 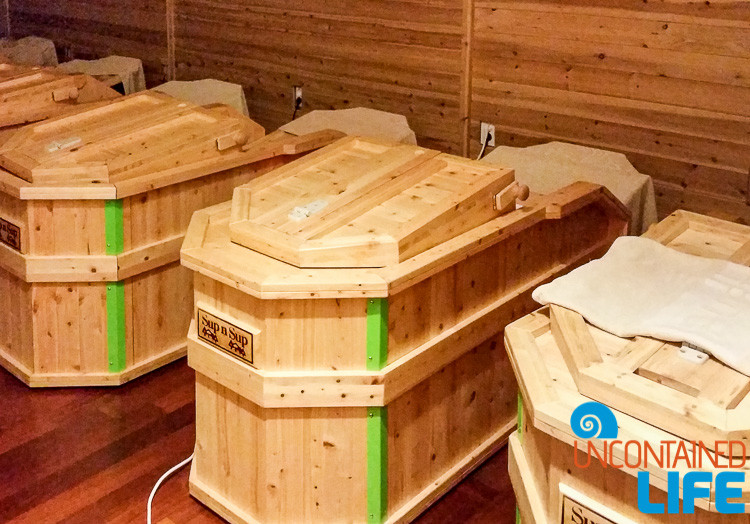 We decided that the massage chairs were a good idea. Fifteen minutes later, we congratulated ourselves on our genius.

By that point, I had spent time sitting down, lying down, and walking around a bunch of hot rooms with my clothes on and familiarizing myself with every amenity the spa offered…oh, wait. Not EVERY amenity.

I said goodbye to Hillary and returned to the locker room. I read all the rules on the wall, including the rule that you can’t have a tattoo in the pool room. (I later found out that it refers to specific tattoos connected with criminal syndicates). I then returned to my locker, removed my spa clothes and entered the giant room of pools, steam saunas, bath cubicles, body scrubs…and…skin. Lots and lots of skin.

No photos allowed in the pool (good rule) so I’ll just paint you a verbal picture (I’m going with the impressionistic period).

Now, the first thing you do (as per the rules) is shower before entering any of the pools. Pretty standard except that they provide soaps, shampoos, conditioners, scrub clothes, and open cubicles where you can either stand or sit. Many of men spent more than 45 minutes just scrubbing themselves. Now, I enjoy a long relaxing shower like anyone else but these guy meant business. They reminded me of Ethan Hawke’s shower ritual in Gattaca. A lot of washing. A lot of soap. A lot of scrubbing.

The bath-room itself is an impressive space. With vaulted ceilings and about a dozen beautifully designed pools, it put the hot springs pools Hillary and I had visited near Palm Springs, California to shame. Each pool has a giant thermometer (so you know what you’re getting into) displayed in Celcius. Most of the temperatures range from 31 to 40 degrees, but there are two small pools that range from 45-48 degrees and one cold pool at a chilly 19 degrees.

I started in one of the main pools at 36 degrees. One older gentleman was already in the pool so I gave him some space at and sat down on the other end.  I leaned back against the wall of the pool and had about thirty seconds of relaxation and peace before it happened.

“It” was the Korean spa version of musical chairs.

Of the dozen or so men in the spa, one hundred percent spent approximately one minute in a pool and then would stand up and walk to another pool. It was like watching a billiards table after the break.

I did want to try all the pools, but I didn’t understand the one minute phenomenon so I spent about five minutes in each pool. Many of them had jets typical of a jacuzzi but I quickly found my favorites. I named them:

The reclining “Megajet” pool was just that. Giant jets controlled by pushing a button. There was only room for three people so I had to keep on eye on Megajet to wait for an opening.

The two hottest pools, the “Cauldrons,” were between 45-48 degrees.  I noticed only two other people use these pools but I like the extremes so I kept returning to the cauldrons. And, in keeping with my theme, my other favorite pool was the 19 degree pool, “Frostbite Soup.” One other gentleman lasted about ten seconds in Frostbite Soup. In my mind, I was training for the polar bear club as I went between the Cauldrons and Frostbite Soup. (I think the Koreans just thought I was nuts…gotta keep up those foreign relations.)

Having thoroughly confused my body with vacillating temperatures, I decided to end my time by trying the Finnish steam saunas. These were nice. Again, various temperature levels available and I chose the hottest one. There was an HDTV playing Korean baseball and wooden benches where you could sit and sweat. Side note: You know those movies where the men are sitting in tiny towels in a steam sauna and some top secret meeting takes place or a big fight breaks out. It was exactly like that, except without fighting, or talking…or towels.

My time was over, and I had sweat out every last drop of water in my body so I returned briefly to Frostbite Soup to cool down and then said goodbye to all the pools and all the naked.

Hillary met me out front. Apparently, she’d had the time of her life (though she didn’t name her pools). She asked me how I felt. “Dehydrated,” I replied.

“Ok. What do you want for dinner?” She asked.

3 Responses to What I Did for Love? A Korean Spa Story